I am here once again to make three manga recommendations. 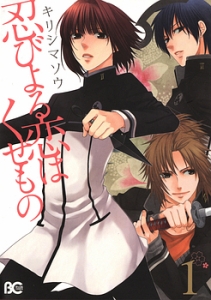 Since long ago, a bitter rivalry and feud has long existed between two clans, the Toujo and Toyoda families. Because of this feud, it has long been Kanade’s job as a shinobi to ensure the safety of Keigo, a member of the Toujo family, ever since childhood. Her devotion to her duty as a guard is a source of contention for Keigo, who would rather have her as a childhood friend than as a protector.

Of course, this protection extends all the way to school, so when Kanade comes across the Eishi Toyoda in class, the heir to the Toyoda family, she is initially hostile. After an attack, Kanade soon discovers Eishi is not exactly who she expected, and that threats to Keigo’s safety do not just exist from the Toyoda family but within the Toujo family itself.

Another ninja and cross-dressing story. I don’t really know where the story is heading now, but the romance that shows along with some yandere tendencies is quite the treat. There are times when i think male yanderes are justice and I have to admit that I read this when I thought this. Of course there is comedy and the misunderstandings once in a while along with a main female character with denseness is also quite a treat.

Closet-otaku girl Hirayama lives a peaceful and normal school life. That is until she meets the smart, handsome and popular high-school president and discovers his secret. Her peaceful and quiet world is now starting to fall apart.

Speaking of comedy this manga is filled with it. Have you ever met an Otaku with a love for drawing and fear to have interactions with 3D people or a student president with connections to the mafia who is also a sadist? Well this manga has them as main characters. I admit I read this just to know the secret of the student president, but even after learning the secret I continued to read this and laugh my heart out. It is also good to read when I am having a depressing day. No romance as far as I can see for now, but that doesn’t really matter. I’m pretty sure the two get together anyway, even though they are at each others’ throats. Fight On!

Hori is your average teenage girl… who has a side she wants no one else to ever find out about. Then there’s her classmate Miyamura, your average glasses-wearing boy in school and a totally different person out. When the two meet unexpectedly, they discover each others’ secrets and develop an unexpected friendship.

Another manga filled with laughs. The two main characters have their funny secrets that they keep from the school, but this manga doesn’t only focus on them. The the other characters in the story also have a part like how the student council president was revealed not to be able to cook (microwaving doesn’t count as cooking). This manga is actually licensed here in the states staring this month. I am pretty excited about it and I might buy it…when my paycheck comes in and I have paid for new tires.

Those are my recommendations and as always, please support the creators of these works and the translators when you can.

Manga Hunter here once again. The flood warning alarm kept waking me up, so I wanted to read a light novel in the recommendations and discovered that The Black Knight Who Was Stronger than Even the Hero link was dead, so I made a new link, so it should be working now and I can enjoy the work once again. I hope you guys enjoy it too and I made it sure it works. If the link is dead again, please let me know. Do not stay silent.

I am just a girl who loves to buy manga and anime, write anime like stories, as well as read manga, fanfics, and light novels. In other words, I am an Otaku and proud of it.